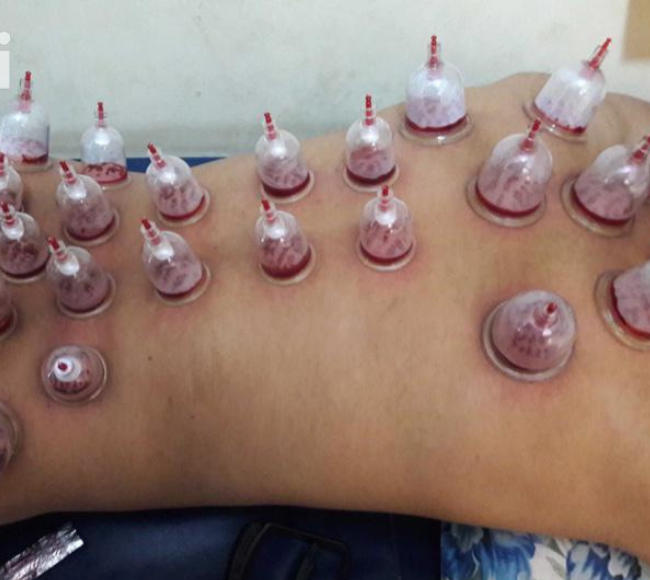 Some studies indicate that cupping may reduce fibromyalgia symptoms more effectively than conventional treatments. But it doesn't appear that the procedure works any better than a sham version of cupping.

A type of traditional Chinese medicine, cupping therapy involves creating a vacuum within glass cups placed on certain acupuncture points on the skin. This can be done by heating the air within the cup before placing it on the skin.

The resulting suction pulls the skin part of the way into the cup. The cup may be left in place for several minutes and then removed, leaving behind a bright red, circular welt. In wet cupping, the skin is pricked with a needle before the cup is placed.

Proponents believe that cupping therapy can help increase circulation and promote healing. The procedure is generally safe when performed by trained professionals, but it can cause bruises, soreness, burns and, rarely, skin infections.

Studies of cupping typically measure the procedure's effectiveness by comparing it with that of other forms of treatment. However, high-quality research studies usually also include a group of people who receive a placebo — a sugar pill or a fake version of the procedure being studied.

It has been difficult to devise a sham version of cupping that can't be recognized as a sham by the participants in the study.

So while some of the available studies do suggest a possible role for cupping in treating fibromyalgia, the definitive answer to its actual role will have to wait for larger and more rigorous studies to be completed.

“We believe in treating the patient and helping him achieve the best possible sex life. When positive things start happening in the sex life of an individual, it starts bringing spectacular changes in his normal life too.

Copyright ©2021 All rights Reserved to D.H.Bagalkot | Maintenance by Online Crawlers